Canola oil is not only one of the safest forms plant-derived oils on the planet, but is also one of the oldest forms of fuel agents used by human civilization. The legacy of canola oil dates back approximately 4,000 years, when the first known accounts of rapeseed use emerged in lndia. The cultures of China and Japan were also early adopters of rapeseed roughly 2,000 years ago before the oil began turning up in lamps in Northern Europe in the 13th century. Jump ahead 700 years, canola plays a role in the life of billions of people, increasingly as an edible oil.


If you are looking for manufacturers or suppliers of canola oil manufacturing plant, ABC machinery who can garantee Top Quality, Timely Delivery and the Lowest Price should be your first choice! Contact us to get more information about our canola oil making machines and turnkey cooking oil plant!

When you are planning to establish your own canola oil factory, view the folloing projects and take the the equipment selection and factory layout for reference. Feel free to contact for equipment price list and project cost details!

One of Our Client - Edible Canola Oil Manufacturer in India

If you want to know more about this edible canola oil plant, please don't hesitate to contact us and we'll be happy to answer any of your questions, create a custom-tailored oil processing business plan, or anything else you might need. We'd be delighted to answer any other questions you may have. ABC Machinery's projects span across the globe and we can help you out with your production business whether the scale is large or small. 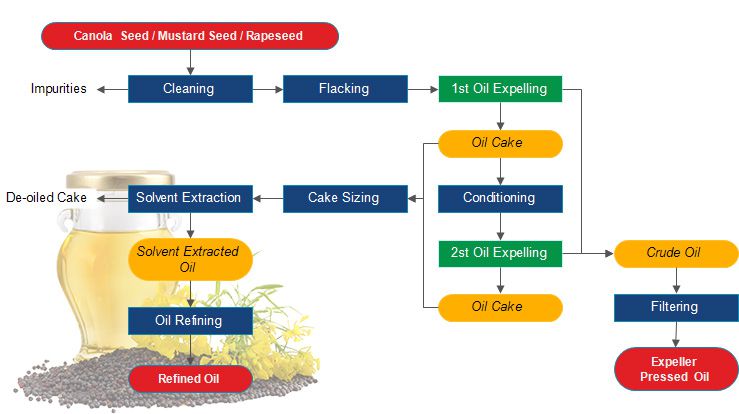 The first step at the canola oil manufacturing plant is the pre-treatment of the rapeseed. The seeds initially need to be cleaned. Magnets are used to remove any metals, and impurities in the rapeseed can impede the extraction process when obtaining the canola oil, so they are screened and removed. After this step, the rapeseed heated in a cooker to precondition them for extraction. After cooking, the cells of the seed need to be crushed, so they are ruptured using mechanical rollers, squashing them into thin pieces. This process eases the extraction of the rapeseed oil. The last step in pre-treatment is heating the seeds one last time. They are then left to dry out.

The oil is extracted from the pre-processed seeds using a mechanical process known as expeller pressing. This squeezes the seeds so that the oil can be extracted. The screw presses down and uses friction to squeeze out the oil. Not all of the oil will be obtained this way, as there is only an approximately 75% yield from this process. The next step is to extract what remains from the hardened oilcake with use of a solvent. Hexane is the most common option for this in a large manufacturing plants. (Recent News: Canola Oil Expeller sold to Chile) 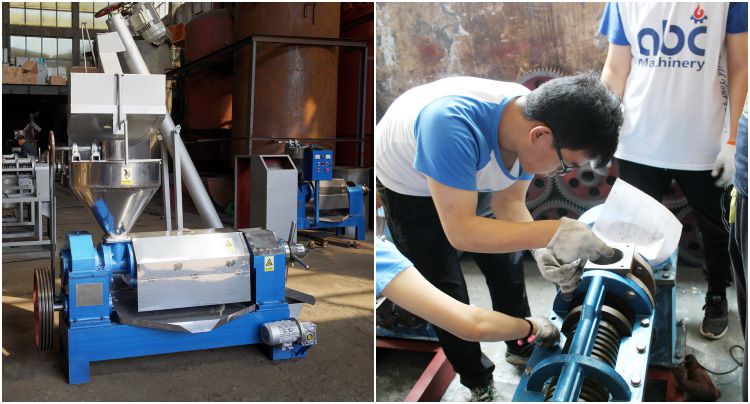 Cold-pressing has become more common in the manufacturing of canola oil, which follows the same general steps outlined above but does not involve hexanes extraction.

If it is intended to be edible oil, canola oil that has gone through either of these processes must be further refined. The process of refining is essential to ensure there is nothing left in the oil that could contaminate it, which can include substances like free fatty acids, pro-oxidants and phosphatides. This will make enhancements to the flavor, color and scent. It also stabilises, neutralizes, degums and bleaches the oil. Sometimes even further steps are desirable at manufacturing plants, including winterization (a type of fractionation), dewaxing, or changing how the oil melts. (Learn more about crude oil refinery plant cost >>)

Wth advances in technology, different treatments are now used at canola manufacturing plants to process salad oils, margarine and shortenings. Inspired by the highest standards of health and hygiene, modern day processing remove unattractive colour compounds. Edible oil manufacturers increasingly use the process of bleaching, whereby the oil is moved through a natural clay. Bleaching also provides the added benefit to consumers in the fact that it doesn't involve any harsh chemicals. More specific to edible oils and indicative of the evolution of canola oil manufacturing, the final step in oil refining any type of vegetable oil is deodorization. Newer technologies such as steam distillation also removes any compounds that could give the oil an unpleasant odour or taste. (Related Post: Canola Oil Processing Plant Details >>)

The majority of the market for canola oil is dominated by culinary use, i.e. cooking, frying, and as a widely-used ingredient in processed food. It is also used for lubrication, in cosmetics, and other personal care products. Other byproducts may be used for additional profit in this industry. An example of this would be the production of biodiesel, a fatty acid distillate- derived fuel. With environmental concern rising, this renewable fuel is an excellent added value product from oil manufacturing, and refined canola oil plays an important role in the industry.

Additionally, thee remaining oil cake has value in the livestock industry as a source of animal feed, being the second-largest source of feed in the world. It's an excellent option for this, as the low glucosinolate count and healthy ammino acids are of great nutritional value to farm animals.

The global market for canola oil  production soared to 31.7 million tons as of 2018. By 2024, market projections predict a further volume of 44.4 million tons, which is a 5.8% CAGR expansion in the intervening years. Regions of this market are divided into Asia-Pacific, Europe, North America and Rest of the World, with North America leading this market, where it is likely to remain. Canada was the first country to produce canola oil, and it still makes a significant contribution to market growth regionally, as well as being a main exporter. It's expected that it will remain a dominant player in the regional market. (Related Post: Equipments for setting up small scale cooking oil production line >>)

The Asia-Pacitic region has an increasing demand for canola oil because of its purported health benefits and increasing awareness of this amongst the population due to the rise of heart disease or stroke. This is the reason for the expected higher CAGR. Increased health concerns is a major driver in market increase, across all regional markets. Europe is a large user of canola oil as biodiesel and cooking, and because of this is predicted to maintain steady grown over the coming years. Rest of the World is also predicted to also have significant growth across 2023.

Canola is a Low-acid Cultivar of Rapeseed Oil

Rapeseed oil extracts were first put on the market in 1956-1957 as food products. And by the 1970s, in Canada, traditional plant breeding techniques were introduced to remove the anti-nutritional components (erucic acid and glucosinolates) from rapeseed. This innovative was essential to ensuring the safety of canola oil for human and animal consumption, impacting the life of billions in the process. The name itself is testament to this fact, combining the “Can“ (for Canada) and “ola“ (for oil low acid). (Related Equipment: Rapeseed Oil Press)

With scientific breakthroughs and investment in technology, the manufacturing of canola oil has continued to evolve in sophistication and sustainability, while remaining true to the processing principles forged in the middle part of the 20th century by planters in Canada. Read about detailed differences between mustard oil, rapeseed oil and canola oil >>

The future of canola oil manufacturing continues to move in more sustainable directions. The Canola Council of Canada (CCC) has set a new target of 26 million MT bv 2025, the majority of which will come from genetic improvements and enhancements to legacy manufacturing plant production techniques. A move towards a biorefining model for canola and increased investment in processes that rely on co-streams and waste streams from processing oil and meal will become essential to achieving this achievable and sustainable goal.